5 Reasons to Trade in Disneyland for Tivoli Gardens 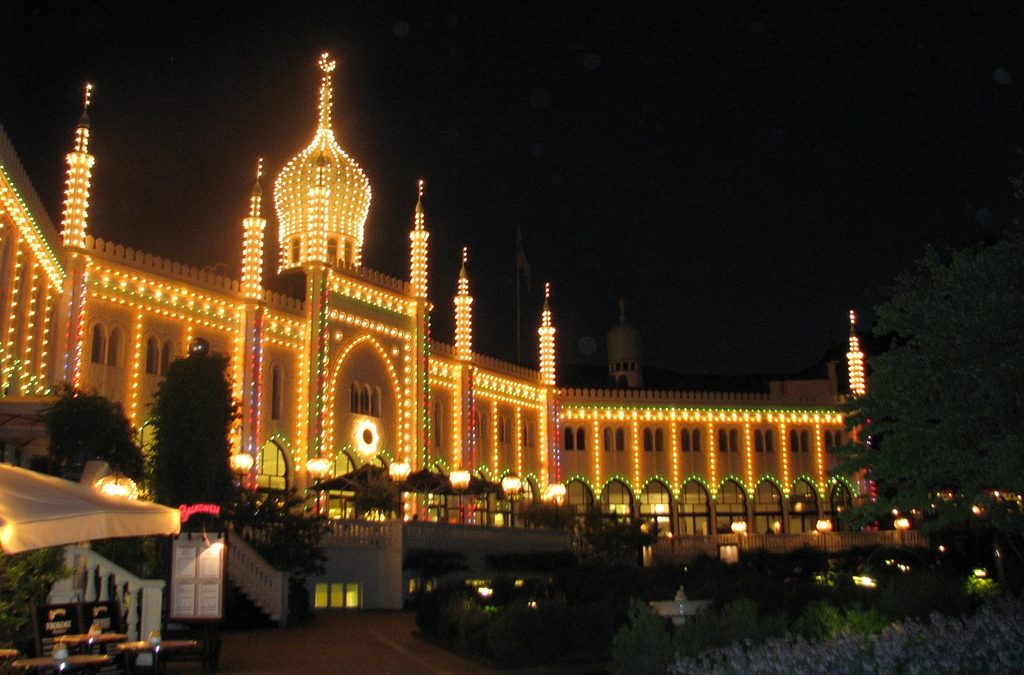 Tivoli Gardens opened to immediate success in 1843 as a pleasure garden within the expanding city of Copenhagen, Denmark.

What inspired Walt Disney to create his own amusement park and compelled Michael Jackson to attempt its purchase, Tivoli Gardens is the original happiest place on earth.  Throughout the years it’s evolved as a park offering sophisticated culture for the public to a modernized, entertaining institution that’s become an urban park oasis and Scandinavia’s most popular attraction.  Parents may see it as a compromise for adults who crave a bit of foreign culture with enough entertainment to keep the kiddos happy.

With a selection of over 38 restaurants, Tivoli provides an international array of cuisine from smorrebrod, traditional Danish open sandwiches, shwarma and falafel to savory Japanese ramen and Spanish churros. Kids can try organic French hot dogs with two sausage choices from a century’s old Danish butcher wrapped inside an organic bun baked fresh daily from a local baker, while parents indulge in frothy draught Belgian beers or Croatian wine. Casual burgers, bratwurst, lamb and shrimp can be found on the grill. Freshly squeezed juice bars, vegetarian stands and a pancake house known for using rye batter round out the diverse selection providing options play dates to date night.

Tivoli Gardens are set among gently sloping landscapes.  Various lime, elm and chestnut trees serve as borders enclosing floral gardens, which naturally change from cherry blossoms in spring to colorful fall foliage.  The carefully manicured and picturesque layout are reminiscent of Disneyland’s pristine grounds.  However, just a few steps outside the park and you are in the center of a vibrant, clean and accessible Danish capital.  A short walk from Tivoli you can set foot in the inviting and well preserved 400 year old renaissance Rosenborg Castle that houses historical treasures such as the Throne Chair of Denmark and the Coronation Carpet.  The Crown Jewels feature some of the finest emeralds in the world along with diamond, ruby and pearl sets.

Summer brings music alive to Tivoli Gardens.  Host to the Tivoli Festival, Scandinavia’s largest classical music festival, Tivoli’s Concert Hall features performances for all audiences.  This year’s lineup covers Tchaikovsky to a rare performance by Lady Gaga and Tony Bennett.  Performances by Elton John and the Broadway musical, Hairspray headline the concert stage.  A Midsummer Night in Tivoli will be held around the summer solstice on June 23 to celebrate Danish traditions and music.  Twenty four Friday rock concerts will take place on the Open Air Stage.  Similar to the Disney theme, a fireworks spectacular takes place every Saturday throughout the summer.  Also, parades often headlined by the Tivoli Boys Guard march through the park’s gardens.

From terrorizing thrill rides such as the Demon, a roller coaster with three loops reaching as tall as 92 feet, to the classical carousel built in 1920 that still brings out the inner child in everyone, Tivoli has rides for the daring teenager to the unpredictable toddler. Tivoli’s most popular ride is the wooden Roller Coaster from 1914 where ride attendants still use handbrakes to control the speed of the coasters.  Retro carnival games such as Muldvarpen, where you hit moles on the head as they pop up from their holes to Lerduen a shooting gallery with clay pigeons as the target keep the entire family entertained.  Win and take home a box of chocolates or stuffed animals but pride is the big take home prize.

The absence of a cartoon icon or character merchandise is a striking difference to Disney’s parks.  Hans Christian Anderson, Denmark’s beloved son, known for fairy tales such as The Little Mermaid and The Emperor’s New Clothes isn’t even immortalized into a plush doll or key chain.  The focus shines more on time together and enjoying the park.

While flying to Copenhagen may tack on extra costs to the trip, the affordability of the park may soften the blow.  Tivoli Gardens is free for children seven and under and only 99DKK (nearly $15 in today’s exchange rate) for ages 7+.  However, tickets for rides are a separate purchase, in which a multi-ride ticket can cost 209DKK (approximately $31) for ages one and up.  Compared to Disneyland’s ticket prices, Tivoli Gardens seems like a deal.  Children ages 3-9 come in at a steep $93 each with anyone 10+ the charge is $99.  Rides are included in the ticket purchase.